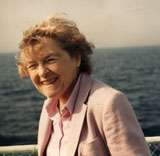 In 1948, after the untimely death of her husband on an Air Force mission, Phyllis left Philadelphia and brought her two young daughters back to the Boston area. She earned the Ph.D. from Boston University in 1959 and was a professor at Simmons College for 34 years.

Always interested in travel and other cultures, she took sabbaticals in Switzerland and Sweden, joined a “People to People” program to Russia and Europe, took part in the first goodwill trip of the ACS to China, joined Earthwatch expeditions to the USSR, Poland, and Rarotonga.After retiring from Simmons, she taught in Japan and Guam before becoming a lecturer at Framingham State College.

Throughout her long career in Boston, Phyllis was extremely active in the Northeastern Section of the American Chemical Society. In 1974, she was the first woman to preside in the chairmanship of the section. She was also a Member of the Board of Directors, a member and/or chairman of numerous committees, a Councilor of the section, a Trustee, and an Editor of The Nucleus. She was among the prime organizers of chemical events, such as the “ACS Night at the Pops” and the “Summer Thing” annual outing.In 1985, she received the Henry A. Hill Award for Outstanding Service to the NESACS.

Phyllis’ sense of adventure, scientific curiosity, and passion for teaching were evident in all aspects of her life.

For more information about Phyllis A. Brauner, please click here.

The Phyllis A. Brauner Memorial Lecture Endowment is a participant in the National Chemistry Week Endowment. Individual or corporate pledges of $3000 or more to the Brauner lecture may be paid over a period of up to five years, and may be eligible for matching funds from the American Chemical Society through the ACS Matching Gift Fund Program. Donations of any amount from individuals, corporations, and foundations are welcome.

The Phyllis A. Brauner Memorial Lecture

One of the many programs Phyllis helped to launch was the popular Holiday Lecture series modeled after the Faraday Christmas Lecture at the Royal Society in London. Many people may recall the lectures, “Once Upon a Midnight Cheery, in the Lab of Shakhashiri.” The first Holiday Lecture was held on December 29, 1986 at the Boston Museum of Science. Despite dour predictions from cynics who insisted no one would come, the lecture was very popular with an audience of 350 (and several hundred people were turned away at the door).

Over the years, Phyllis organized numerous lectures featuring chemistry educators, such as Hubert Alyea, Jerry Bell, and Dudley Herschbach. The lectures have always been free to the public and have drawn enthusiastic audiences of all ages.

In commemoration of Phyllis’ lifetime of work, the Northeastern Section of the ACS has instituted the annual Phyllis A. Brauner Memorial Lecture, to be held during National Chemistry Week (NCW). The guest lecturers are scientists dedicated to disseminating chemical knowledge to the general public and the lectures usually include chemistry demonstrations to amaze, delight, and involve the audience.

The Phyllis A. Brauner Memorial Lecture Endowment will support the expenses for the annual event and will also include financial assistance to some financially disadvantaged local schools to help make their attendance at the lecture possible.

Bassam Shakhashiri – Earth’s Atmosphere and Beyond!!

For information on the ACS Matching Gift Fund Program and other donation opportunities, contact: