The eleven students listed in Table 1 were selected to represent NESACS at the 2022 Frühjahrssymposium in Hannover, Germany as a result of interviews conducted in November, 2021. Justin Hayes was unable to go on the trip because he tested positive for COVID-19 just before the delegation was to leave for Germany on March 19. Of the remaining ten delegates, nine of them and three accompanying others: Jackie O’Neil, Jens Breffke, and Zemen Berhe, flew overnight to Dublin and on to Hamburg, Germany on Sunday. The tenth student, Klaudja Caushi, was not allowed to board the plane to Dublin because she was flying on an Albanian passport that required a special travel visa to enter Ireland. She was rebooked on a Lufthansa flight from Boston to Frankfurt and joined the other delegates in Hannover on Monday.

TABLE 1. Student Delegates Selected for the 2022 Trip to Germany

*Unable to travel due to a COVID-19 infection.

The main group of delegates was met at Hamburg Airport by Elisabeth Kapatsina of the German Chemical Society (GDCh), who was to be their guide, adviser, and close companion for the week. A charter bus brought them to their hotel in Hannover. That evening the delegates were welcomed by their JungChemikerForum (JCF) hosts at a dinner featuring classic German food and beer.

On Monday morning the delegates (Figure 1) went on a tour of the city of Hannover, led by a tour guide who captivated them with his endless stories and irreverent sense of humor. Among the sites they visited where the Neues Rathaus (New Town Hall, Figure 2), which was completed just before World War I, and Aegidienkirche, a church that was built in 1347, heavily damaged in an air raid in 1943, and left in ruins as a war memorial (Figure 3). 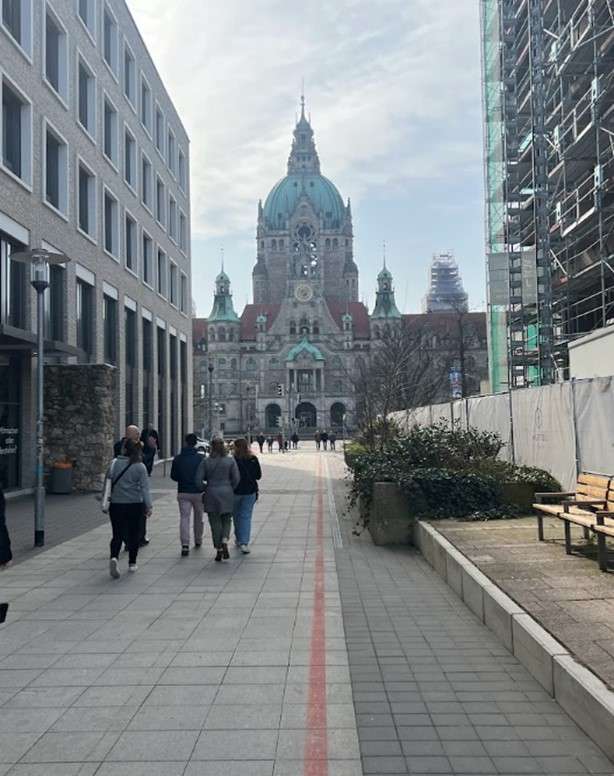 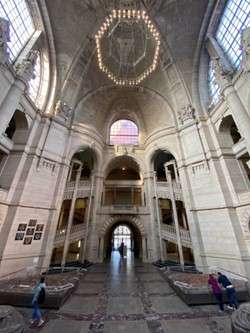 Figure 2. (a) Delegates approach the New Town Hall and (b) view its vaulted interior 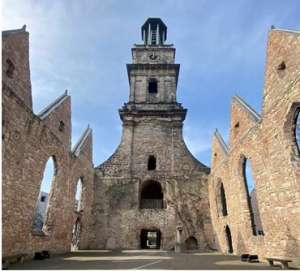 Figure 3. Aegidienkirche is one of the few old buildings in Hannover that was heavily damaged during World War II and not fully restored.

After an afternoon of free time on Monday, delegates toured the campus of Leibniz University on Tuesday morning, visiting many chemistry research labs and an ornate lecture hall in the Institute for Inorganic Chemistry (Figure 4). 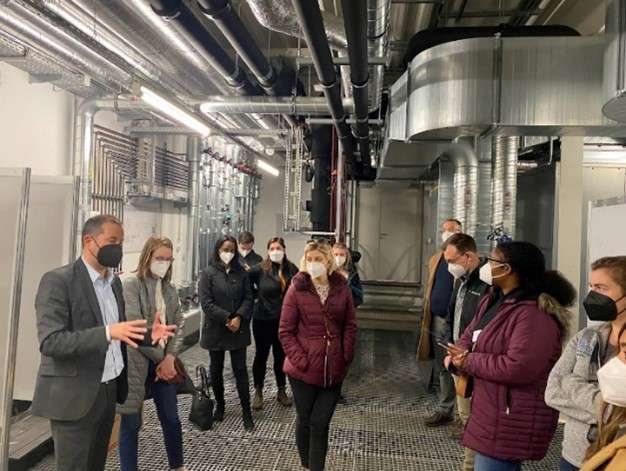 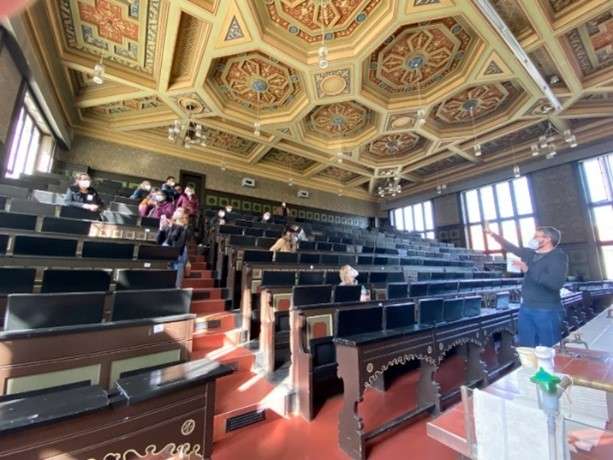 Figure 4. (a) Delegates’ tour of Leibniz University included this one and many other research labs and (b) a staged lecture in the impressive Kali-Chemie-Hörsaal.

Tuesday afternoon was spent on a guided tour of the magnificent Herrenhäuser Gardens. Though the gardens lacked much of their warm weather color and greenery, delegates enjoyed the sculptured evergreens, magnificent buildings and monuments, and interacting with the gilded statues (Figure 5). 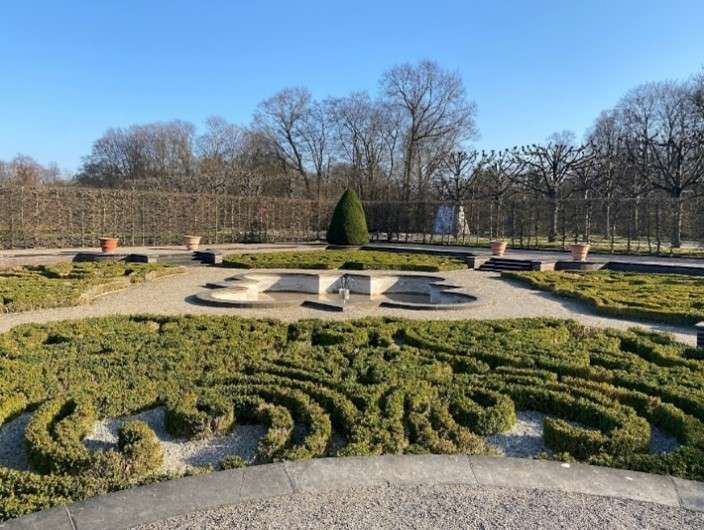 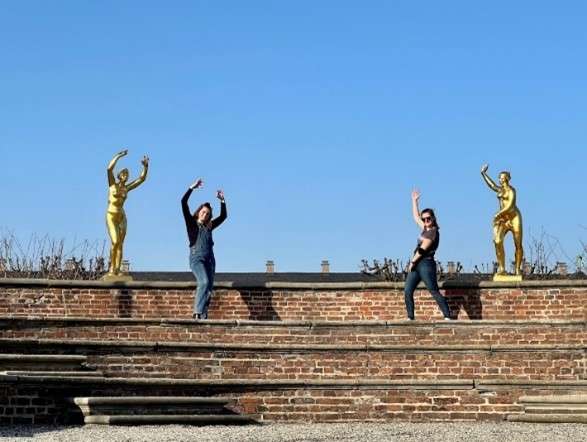 Figure 5. (a) Most of the trees in Herrenhäuser Gardens had yet to leaf out; (b) however, Hannah Boyce and Caroline Millard enjoyed interacting with two of the many gilded statues.

Wednesday morning began with a guided tour of the Sprengel Museum, which holds one of the most significant collections of modern art in Germany (Figure 6). The tour was followed by the delegates first of several visits to a COVID-19 test center prior to checking in at the Frühjahrssymposium. That afternoon they enjoyed coffee and cake with the JCF executive board, and that evening attended a networking event hosted by Covestro AG. 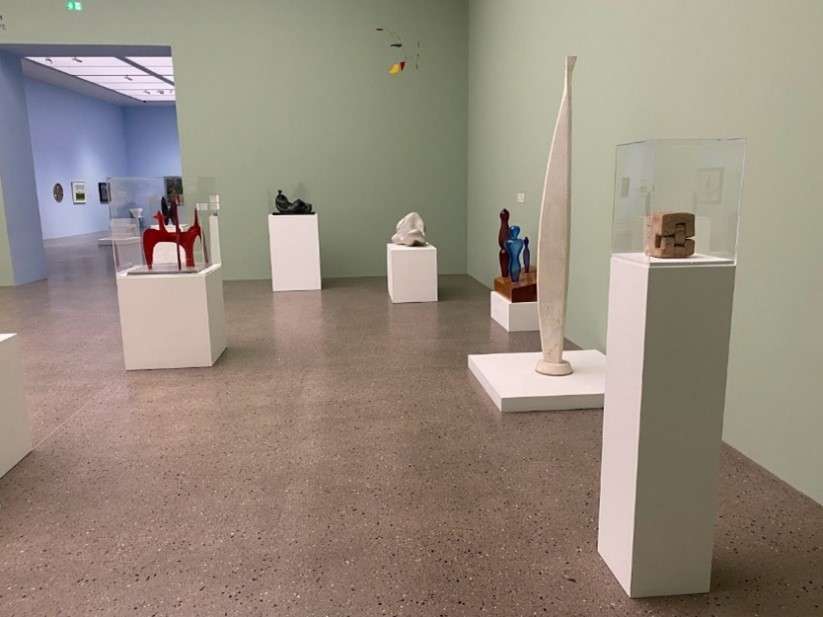 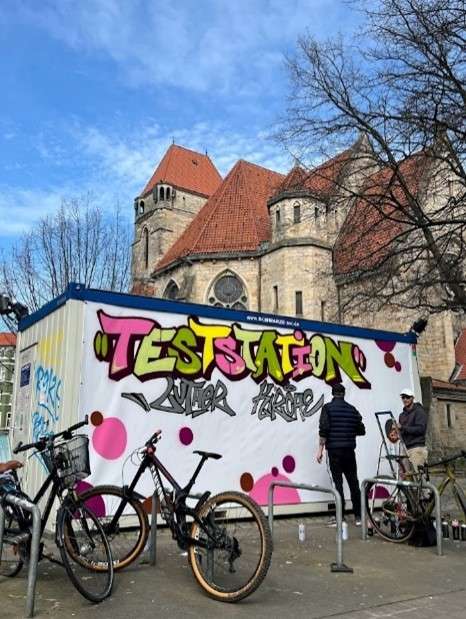 Figure 6. (a) Wednesday morning was spent gaining an appreciation for modern art at the Sprengel Museum (b) followed by the first visit to the COVID-19 test center.

Thursday and Friday mornings began with more COVID-19 tests followed by full days of Frühjahrssymposium technical programing. Most of the delegates presented their research in poster sessions; however, the JCF program committee had selected Klaudja Caushi and Ryan Tripker to give oral presentations (Figure 7). 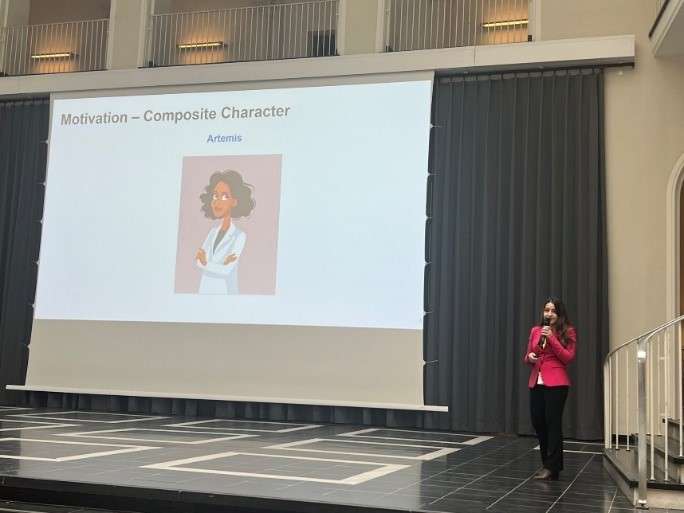 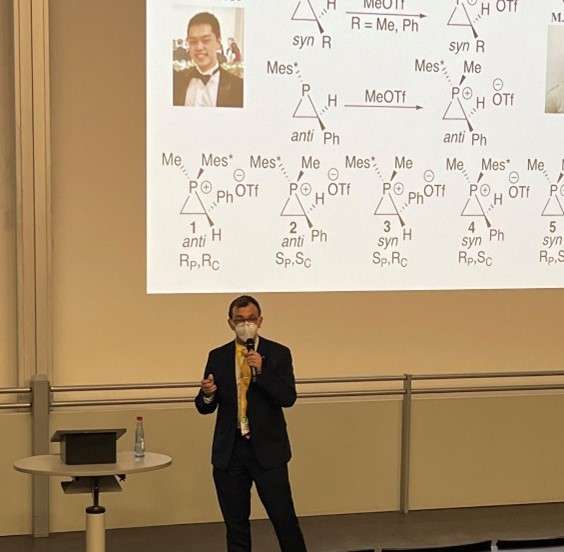 On Friday evening delegates had the opportunity to sample Hannover night life (Figure 9) by participating in a growing Frühjahrssymposium tradition: the pub crawl. As one delegate put it: ‘It was such a delight to be able to talk with people in a casual setting where I could connect with them on a more personal level. It was also fun to share laughs and drinks together!’ 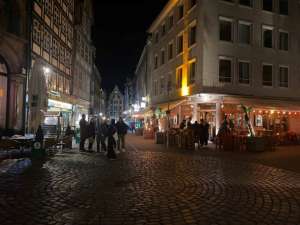 The symposium ended at mid-day on Saturday. During the closing ceremony the symposium organizers noted that the theme of the Frühjahrssymposium 2022 had been ‘Communicating the Future’. In support of that, theme they had judged all the oral presentations to determine which one made the best use of visual technology. They presented their Best Jif of Them All Award to Ryan Tripker (Figure 9.) 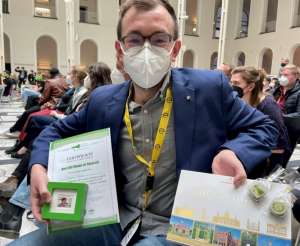 Figure 9. Ryan and his Best Jif of Them All Award

Saturday evening the NESACS delegates were the guest of the JCF at a formal farewell dinner (Figure 10). Unfortunately, by then Dan, Zemen, and Jens had tested positive for COVID-19 and were in isolation at the hotel. Jackie O’Neil took the lead in providing them food and OTC medicine and in making them comfortable. 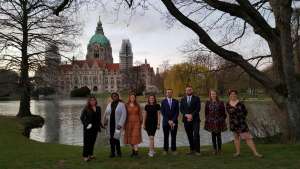 On Sunday the healthy student delegates scheduled to return to Boston did so, and those with extended stays went on to their next destinations before returning to Boston between March 31 and April 2.  Also on Sunday, Jackie and Jens rented a car and drove themselves, Dan, and Zemen to Jens’ parent’s home in Berlin. Fortunately, his parents were traveling at the time and the house was vacant.

For many days Jackie cared for her COVID-19 patients (Figure 11) until they tested negative. As they did, Dan flew home and Zemen traveled to see her family in Stuttgart as she had originally planned to do. After Jens tested negative, he and Jackie flew back to Boston on Monday, April 11. Ironically, after managing to stay healthy for the entire trip, Jackie tested positive on Tuesday, the 12th. 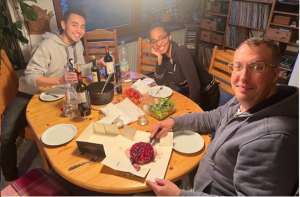 Following their return to Boston the student delegates presented their research at the 23rd Annual Northeast Student Chemistry Research Conference hosted by the Northeastern Section Younger Chemist Committee in a virtual format on April 23. Afterward, it was announced that Hannah Boyce had won the Outstanding Oral Presentation Award

The delegates were also asked to submit brief reports in which they reflect on which of their experiences during the trip to Hannover were most memorable and why. As of May 10, six reports have been received.